New Mexico United didn’t quite get the result they were hoping for in their 2020 season opener, as they fell to Austin Bold FC 1-0 at Bold Stadium. Here’s what I saw:

Tale as Old as United

One of the recurring themes throughout the 2019 campaign was United drawing or losing by a single goal during matches in which the opposing team scored a penalty. There were seven such instances last season:

There were several moments last season in which fans questioned the legitimacy of those calls on the field that lead to penalty kicks, but the fact remains that United left points on the table by conceding those penalties. Last night, unfortunately, was no different. New Mexico controlled most facets of the game, including possession, duels success rate, interceptions, shots taken and shots on target. The only difference? The penalty kick.

As Ema Twumasi received a long ball from Andre Lima, there was a question as to whether or not it bounced off his arm. No whistle came from the referee as Justin Schmidt came barreling into the penalty area, recklessly crashing into Twumasi and setting up the penalty that would allow Lima to score the lone goal of the match. Regardless of calls or non-calls on the field, United’s players have to be better in those situations this season. In those seven matches from last year that I referred to above, New Mexico United earned only four points out of a possible 21.

When the team sheet was announced about an hour prior to kickoff, the back line consisted of David Najem, Kalen Ryden, Justin Schmidt, and Manny Padilla. Completely absent from the team sheet were Josh Suggs, Austin Yearwood and Rashid Tetteh. A few minutes before the game began, the team tweeted out a “Pre-match Injury Report” that listed those three defenders, as well as Ryan Williams as out with “lower body” injuries. This meant that, barring another injury, we likely wouldn’t see a defensive sub at all during the game. Thankfully, no one was injured and the back line did a pretty good job of playing together and limiting Austin’s chances, holding them to just six shots (one on target) the entire night. I think Najem may have been a bit more comfortable on the right side, but once those other guys get back from injury, the defense should be even stronger as the season continues.

They See Me Ryden Dirty

Beyond being everywhere on the field and having a very successful night defensively, newcomer Kalen Ryden showed that he is willing to get involved on offense as well. Right before halftime, Ryden took the ball away from Lima in the midfield and immediately went streaking down the left side before whipping a cross in toward the goal. That cross found its way to Amando Moreno, who took a good look at the net, but sent the shot over the bar. It was very encouraging to see such a solid defender be so confident while bringing the ball up the field on offense. 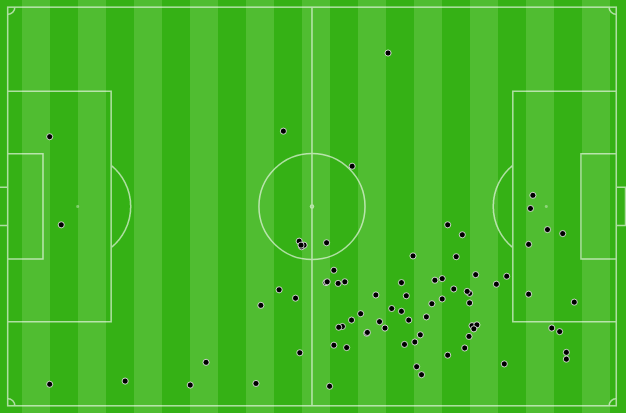 New Kid on the Corner?

More often than not last season, it was Chris Wehan who would set up to take corner kicks. On Saturday, those duties were split between Wehan and Andrew Tinari, with Tinari taking them more frequently. This will be something to keep an eye on as the season progresses. There are several players capable of taking on this job, including, but not limited to Wehan, Tinari, and Moreno. Will Coach Lesesne favor one player for this role, or will they continue to share the load like they did on Saturday? Hopefully, United can find a few goals from corners kicks this season, no matter who takes them.

Though I didn’t have the chance to travel to Bold Stadium, I did venture out of my house to watch the match with other passionate New Mexico United fans. The watch party that I attended was held at Second Street Brewing Company’s Rufina Taproom, hosted by the 7K Ultras, a subset of The Curse that serves Santa Fe and northern New Mexico. I wasn’t sure what to expect as I arrived, knowing that the quality of the watch parties in Santa Fe last season was a bit lacking. When I walked into the Taproom, I was immediately greeted with a “Somos!” to which of course I had to respond “Unidos!” As we got closer to kickoff, more and more fans began to trickle in, and I would estimate that around 100 people were there to watch the match. I spoke to Second Street’s head brewer, and member of the 7K Ultras, Tom Ludzia, about what it meant to him to have such a great location with a family friendly atmosphere to watch matches in Santa Fe:

“I was so humbled by the amount of humans that showed up for this match,” said Ludzia. “Northern New Mexico supports United, we’re here for you, we got you, we lost this first match, but we got the rest.”

Ludzia spoke about making sure that the space was ready to go for the watch party. He told me that he was there early in the morning, streaming Dutch matches and testing the projector, audio and the internet connection. He plans to move to a bigger screen next week, and to refresh the app at halftime to try to prevent audio lagging. He even hinted at a special treat for those coming to Santa Fe to watch United take on FC Tulsa:

“Next week we’ll have a beer being released for this, a special Curse beer. It’s gonna be the Brew Wallace IPA,” said Ludzia.

I’m not sure what other motivation you need to find and support a good watch party. Despite the loss, spirits were high and optimism remained. Until next week, friends!