This spring, the Lamar Hunt U.S. Open Cup returns after a two-year hiatus due to the Covid-19 pandemic. Fans of New Mexico United have been anxiously awaiting this moment ever since the club’s cinderella run to the quarterfinals in 2019, which saw them defeating fellow USL Championship sides Colorado Springs Switchbacks FC and Phoenix Rising FC before downing MLS sides Colorado Rapids and FC Dallas before finally falling to Minnesota United FC by a score of 7-1 at Allegiant Stadium.

The wait for that return is finally over, as New Mexico United and the rest of the second division independent clubs enter in the tournament’s second round on April 5-7. New Mexico United will host their first-ever U.S. Open Cup match on Tuesday, April 5th at 7:30 p.m. at the University of New Mexico Soccer Complex. That match will be broadcast on ESPN+.

Before that, however, New Mexico United fans will have a vested interest in the first round of the Open Cup, which features clubs from the National Premier Soccer League (NPSL), USL League Two, and local qualifiers. United will not know their opponent for the second-round match until the conclusion of the first-round match between Las Vegas Legends FC and Park City Red Wolves.

Both of these clubs are coming off successful seasons in 2021, with Red Wolves finishing first in the Mountain Division of USL League Two and falling in the  Western Conference Final to Portland Timbers U23, and the Legends finishing first in the NPSL Southwest Division. Both clubs have earned the right to compete in the US Open Cup since their leagues have decided to award berths based on last season’s standings.

Founded in 2018 as a U23 affiliate of USL League One side Chattanooga Red Wolves, Park City are entering their 4th season of competition. This will be their first entry into the Open Cup. Las Vegas Legends began in 2012 as an indoor team in the Major Arena Soccer League, reaching the Western Conference Finals for four straight years before taking a hiatus ahead of the 2015-16 season. 2019 was their first season in the NPSL, and this will also be their first entry in the Open Cup.

As for personnel, the most intriguing talking point surrounding this match centered around former U.S. Men’s National Team member and Las Vegas Lights FC Head Coach Eric Wynalda’s involvement with the Las Vegas Legends. Wynalda himself cleared up any rumors on Twitter Tuesday evening, stating that he will not be the Legends coach for the Open Cup, but that he will be supporting them. 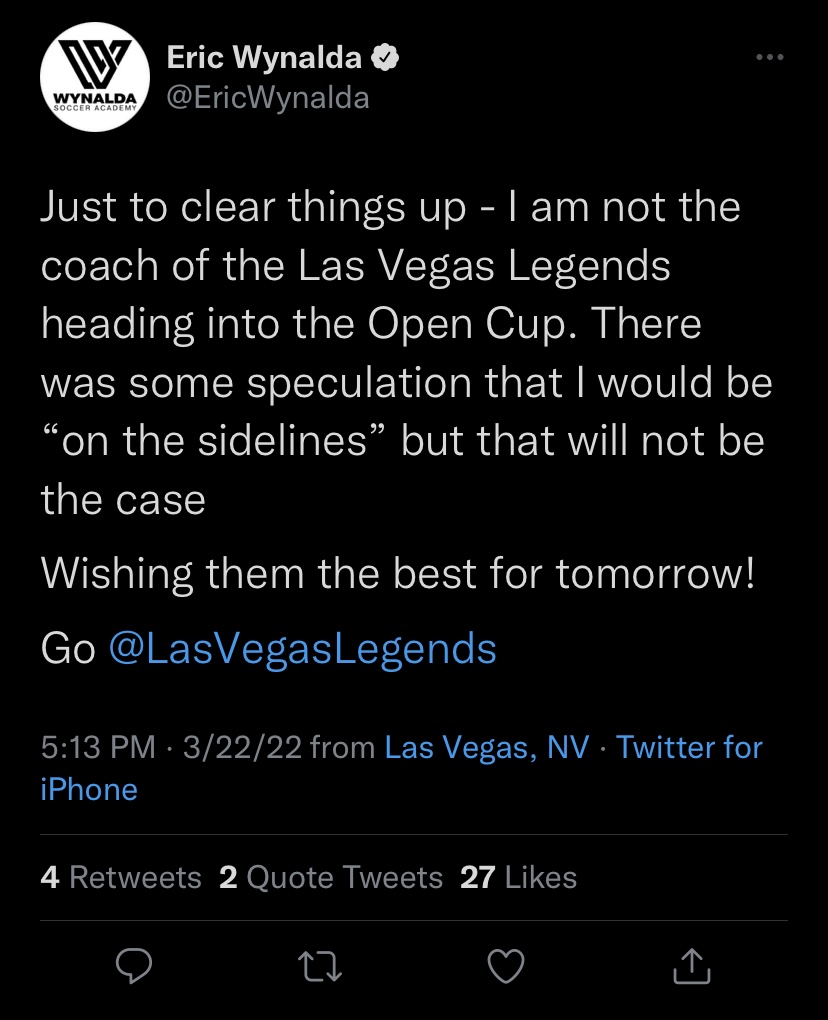 Potential big-name coach aside, there are a handful of players worth keeping an eye on. Going off of last season’s USL League Two stats, the Red Wolves utilized a variety of players throughout their season. Goalkeeper Tanner Kennard led the way with 270 minutes played, seven goals against and 13 saves over three games played. On the offensive side, Jonathan Guadarrama recorded 13 shots on goal over 340 minutes played, while Luis Vargas and Carter Johnson each notched two goals and one assist in four matches. Assuming much of their team from last season returns, they should be a capable bunch with a decent amount of experience together. Regardless of if Park City advances to face United in Albuquerque next month, New Mexico fans will get a look at a Mountain Division foe for their newly re-announced USL League Two side, New Mexico United U-23.

The Legends are a far more statistically impressive group, with a bit more recent data from which to draw, thanks to their participation in NISA Nation, a National Independent Soccer Association incubator league, meant to provide a platform for amateur clubs with aspirations of one day leaping to the professional level. In recent NISA Nation matches, Brandon Vargas and Yuval Cohen have been scoring machines, scoring three and four goals so far in March, respectively. Vargas had a four-goal night against Temecula FC in NPSL play back in June. The Legends are a team with no shortage of scorers, and with the potential to put many goals in the back of the net for 90 minutes.

I predict that Las Vegas Legends will be able to take their strong scoring and turn it into a victory on Wednesday night at the University of Nevada Las Vegas. No matter which side comes out on top, it should be a great night of football full of anticipation for New Mexico United fans.